I wrote a short story every week in 2022. My goals were to get better at writing and to have fun. I'll let you be the judge of the former but I sure did have a good time. This is what they look like: 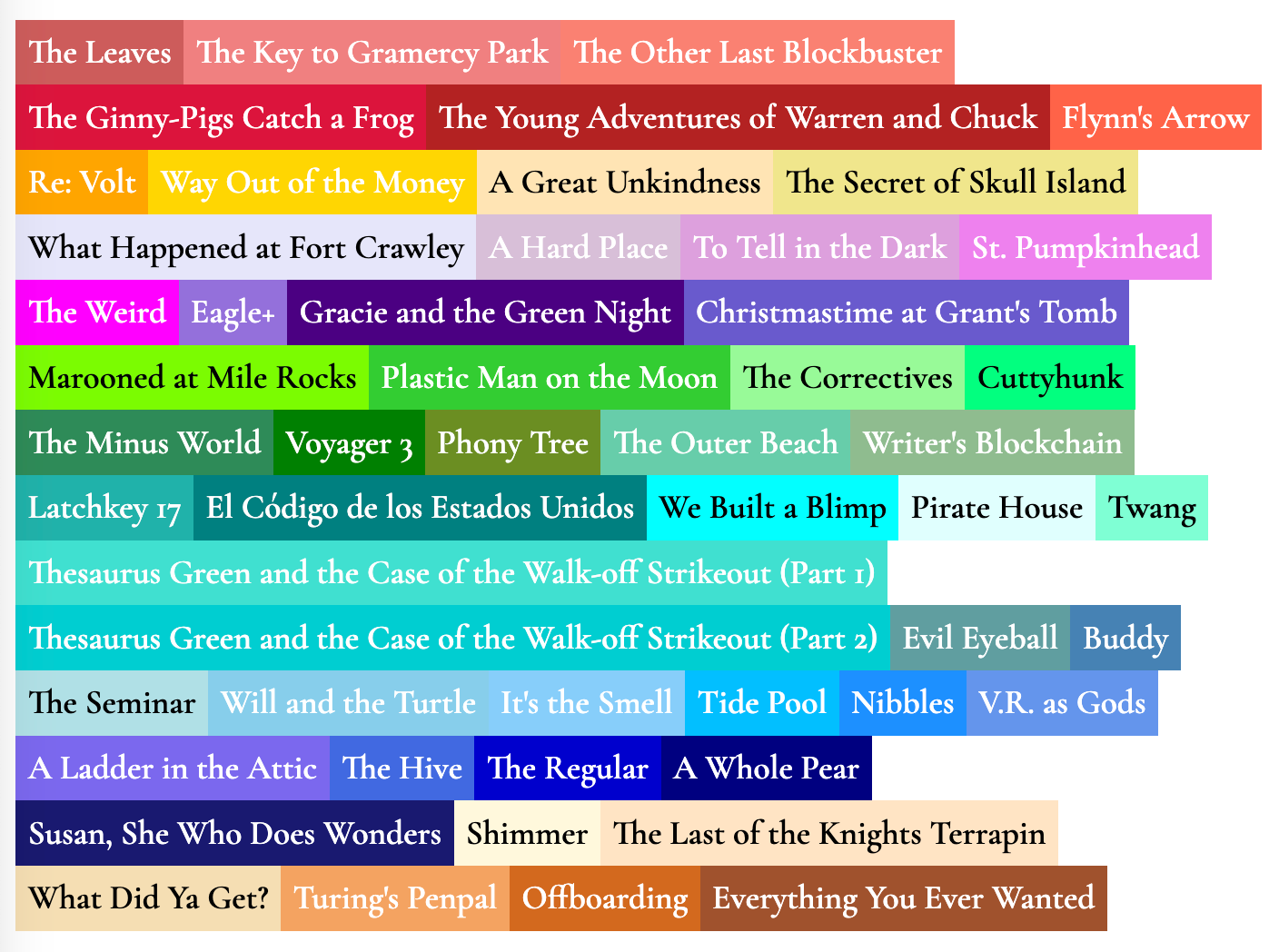 Colorful, right? Technically, there's 53 stories, but that's cause I preloaded up a zeroth story that I'd written a year back so that the site wouldn't look empty and also to trick me into thinking I'd already made progress - you know, the proverbial todo list items you've already done but still jot down so you can cross them out immediately.

Speaking of task management, this is also probably the first "New Year's Resolution" that I really achieved.

There's always chatter around this time of year about whether or not New Year's Resolutions are a good thing or a bad thing. Maybe we're supposed to be doing goals instead. Or anti-resolutions.

The debate reminds of when we were told by our teachers at St. Leo the Great to switch from "giving something up" in Lent to "doing something new that's also good" - which is actually a good setup for a story!

Regardless, what I like about Resolutions Time is the "resetting" it can bring. Sometimes you gotta blow on that Nintendo game to make it work again. It's also a great opportunity to try new things. Many of us seem to calcify as we age (see Thanksgiving dinner discussion topics). But we can resist, my friends, if we simply follow Merlin's advice. Finally, there's often a health theme around New Year's Resolutions, and hopefully you already know my thoughts on being your own health advocate.

Resolutions-rant aside, I thought I'd share some LEARNINGS (is there a more annoying word in modern business-speak? Yes, probably, but don't you dare tell me it) from my year of writing short stories.

Learn the Learnings Learned by a Learned Learner

This one's already part of my life motto (borrowed from children's publisher Klutz Press), and I view it as critical to the success of my short story writing project. I wrote these stories for me, and I like reading them. I think they're fun, and I didn't stress about writing them, even though I did have to carve out time to write them each week. But it doesn't take much time to make a meaningful dent into a short story. I think everyone would be surprised by that - take a phrase or a name or a memory and just start... going.

I wrote many of these stories to simply get them out of my head (where some of them have been rattling around for years, like what if it's The Young Adventures of Indiana Jones but it's Warren Buffett instead and all his greatest investment ideas came from hijinks and misadventures?). As it turns out, not all of my long-standing story ideas were prize winners, but they're at least OUT of my head now, where I can edit or revise them or, most-likely, just move on! My creative cache is cleared and is feeling very performant now.

I coded up the project's website last December. I made sure that I could deploy it with a simple push to GitHub. I made sure that all I needed to do each week was "write the story" and "git push" (other than the podcast recording, a process which I also kept as simple as possible, partly due to lack of audio editing knowledge but mostly because I knew no one was really listening to them anyway other than Carly and my mom).

Write down your dreams, any bits of them that you remember. I use the Drafts iOS app to do this. I dump ideas, character names, dialogue, etc. throughout the day into Drafts, and then process the queue when I'm back at my computer. My phone's always with me, and I'm trying to make it a tool for creativity over pure consumption.

Here's where I would normally write down some "opportunities for improvement" - where I reveal that I'm simply masquerading as a lifelong learner but I'm simply a shameless millenial optimizooor.

However, this is not only a blameless post-mortem, it's also a faultless one, too. I know I could have done a better job of editing and revising my stories. I know I could have written more every single day, and made it a true daily habit. But we are not doing this, okay?

Try to forgive yourself for being human, Charlie, and instead enjoy the fleeting joy of creative fulfillment before the next project begins tomorrow. Have fun, remember!

If you do give my stories a try, keep your eye out for the megacorp Eagle (can we trust them? do we even have a choice?) as well as several adventures across Old New Jersey and the town of Little Bighill.

I'll also highlight two recurring characters: Penelope "Thesaurus" Green and Will. Penny's braver than just about anyone, and Will's -- well, Will's me. Anytime you read a Will story, it's an ever-so-slightly-veiled memory. They're the beginnings of my Dandelion Wine.