I'm typing this post on my iPhone in the Obsidian iOS app using a Logitech K380 Bluetooth keyboard and I feel like a 90s computer hacker.

Not enough? How about this: I just SSH'ed into a Raspberry Pi on my home network using Tailscale via the Termius iOS app to restart a YouTube-playlist-to-podcast-feed Docker container.

Don't get me wrong -- the other stuff is pretty magical, too, especially Tailscale. But this keyboard-to-phone takes the cake.

I mean, look at this: 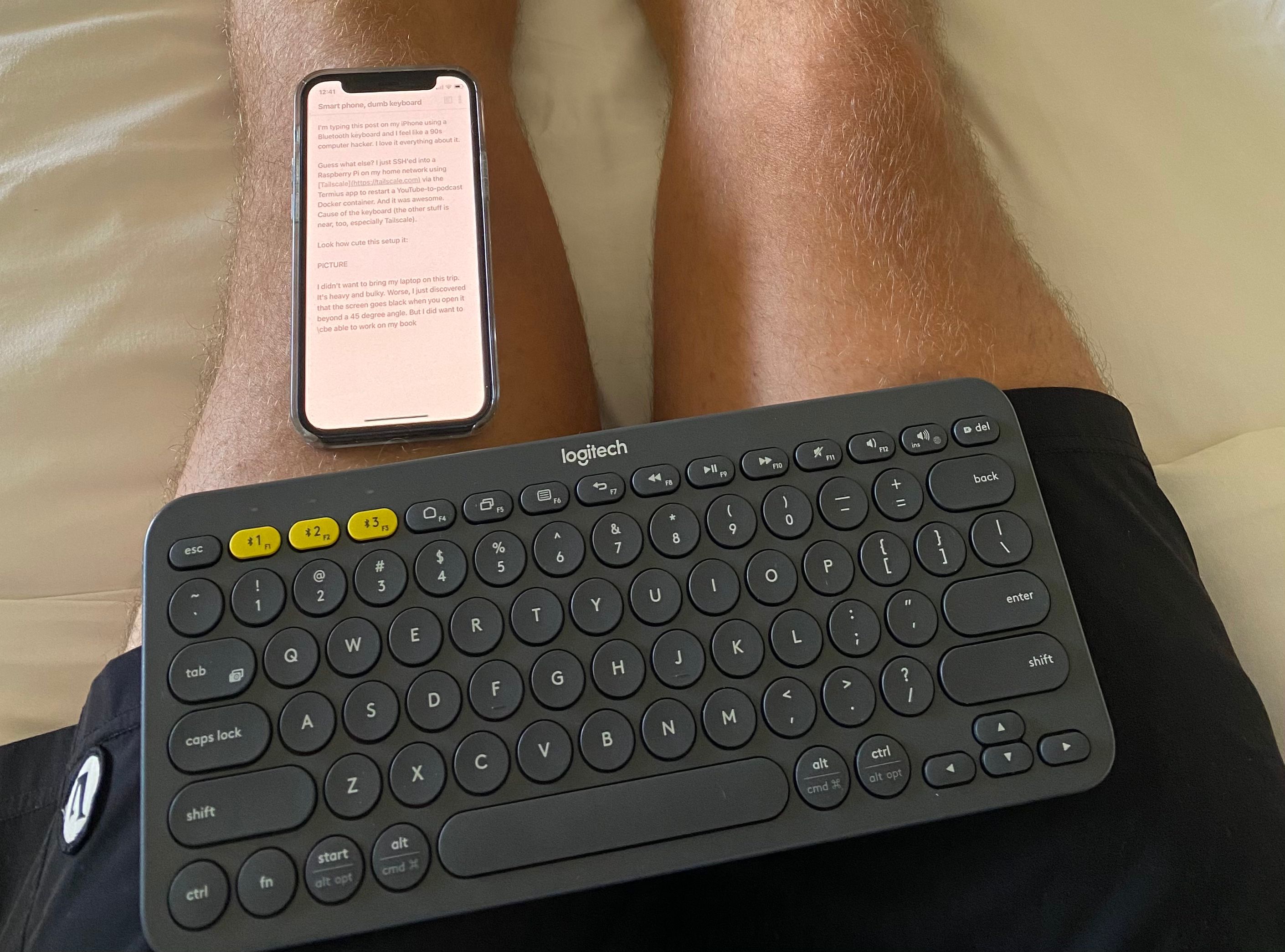 It's downright cute, aside from the legs.

You kinda forget that your phone is a computer, personally-speaking. Instead, it's usually just a vehicle for social media nightmares. Given the choice between doing something semi-arduous, like checking in for a flight, on a phone app vs the website (on a desktop/laptop), I always choose the latter. Somethings always missing from the app, and if you really want to get all fiddly, which I usually do, they kick you out to a crappy webview anyway.

So, I'm usually a laptop-bringer on any trip. Except, this time, I didn't want to. Firstly, my alu-min-i-um portable computer is just plain heavy and bulky, and I was adamant that we were going carry-on only on this voyage. Even more damning, I recently discovered that opening the laptop screen beyond 45 degrees results in the black screen of death. That's something for the Geniuses, if they're willing indulge an admittedly long in the tooth 2016 MBP (I'm doubtful).

But I did want to be able to work on edits for my book on this trip. You never know when inspirations gonna strike (usually, for me, around midnight, when I've already gone to bed), and while I'm reasonably fast thumb-typist, I just don't feel the flow feels on the phone keyboard.

Luckily, we had this little Bluetooth cutie tucked away in a closet. I'd purchased it as a gift for Carly, so that she could write stuff on the go (very much the same need I'm talking about here). We'd extensively discussed the need for a mobile keyboard writing thingie early in our courtship, and we even entertained the idea of building it ourselves (hint: I'm still entertaining this idea).

We're not alone. See the FreeWrite products, which somehow don't quite fit the bill for me, despite almost exactly delivering on our dream product (full-sized keyboard, e-ink-like screen, and supreme battery life). Mostly it's the calculator-sized screen (and the perceived bulky size) that's scaring me away. We want something that you can keep in a purse or a pocket.

Now this Bluetooth keyboard doesn't fit in a pocket, but it's also pretty darn cheap, enough so that I'm not going to be devastated if I lose it or spill a beer on it.

So, I thought I'd give it a try this trip. And I'm sold. It's legit fun to type on this thing and I think I'm going to bring it with me more places. Along with things like Tailscale and Termius, I can treat my smart phone as a dumb terminal to my real computers.

Carly still hasn't given the keyboard a try, but I'm holding out hope. She's watching me tap-tap away right now, and I think this is a gift that just takes a while to kick in.

And, meanwhile, I'm going to keep thinking about keyboards-as-computers, whether that's scouring eBay for Commodore VIC-20s, ogling over the latest Raspberry Pi 400 keyboard-computer, or sketching out our still-yet-to-be-realized "Kindle for writing."

On the latter item, I'm also ogling the ReMarkable 2 as an potential winning entrant, but the lack of keyboard and the lack of backlight are keeping me away... for now. If they're tracking dropped cart analytics at all, I'm just going to apologize now for what I've been doing. You can keep retargeting me if you'd like. You'll get me one day.