Riddle in the dark

What was too early for NFTs, too vertical to be a Samsung Frame TV competitor, kickstarted to life by gifs, and acquired to death by Giphy?

Electric Objects was a computer company building a computer made for art. That's one of the coolest sentences ever, except for the was part. Founder and CEO Jake Levine (a fellow Morgan Stanley escapee) wrote a great what-happened series of posts in 2018 that are worth a read for anyone interested in hardware startups. But, even better, just re-watch their Kickstarter video and experience the pure joy of the creative act of bringing a computer to life.

Electric Objects was gobbled up by Giphy, which in turn was slurped and gorbled into Facebook, and the Electric Objects iOS app is sadly no more. Which, for a computer that was explicly designed to not have a keyboard or mouse, poses a challenge for its owners.

So, why am I still lugging around my EO1?

Because I'm not giving up on the dream, Jake.

The EO1 is a computer, right? Surely, we can boot into its presumably Linux OS somehow, instead of the default Electric Objects app experience thingie?

Turns out, yes, we can! I had to do a fair bit of forum spelunking to figure it out. I was delighted to discover other Electric Object wanderers out there like me. This post was the jackpot.

The long and the short of it is that the company who manufactured the board for the EO1 is called Boundary Devices, and you can download their Linux builds on their website (after making an account, etc, etc). Fling that image onto a USB thumbdrive, attach the thumbdrive and a keyboard and a mouse to a USB hub, connect the hub to a micro-USB adaptor, plug that sucker into the back of the EO1, and then - boom - you've got yourself a weird vertical Linux computer on your dang wall.

It's almost too easy. 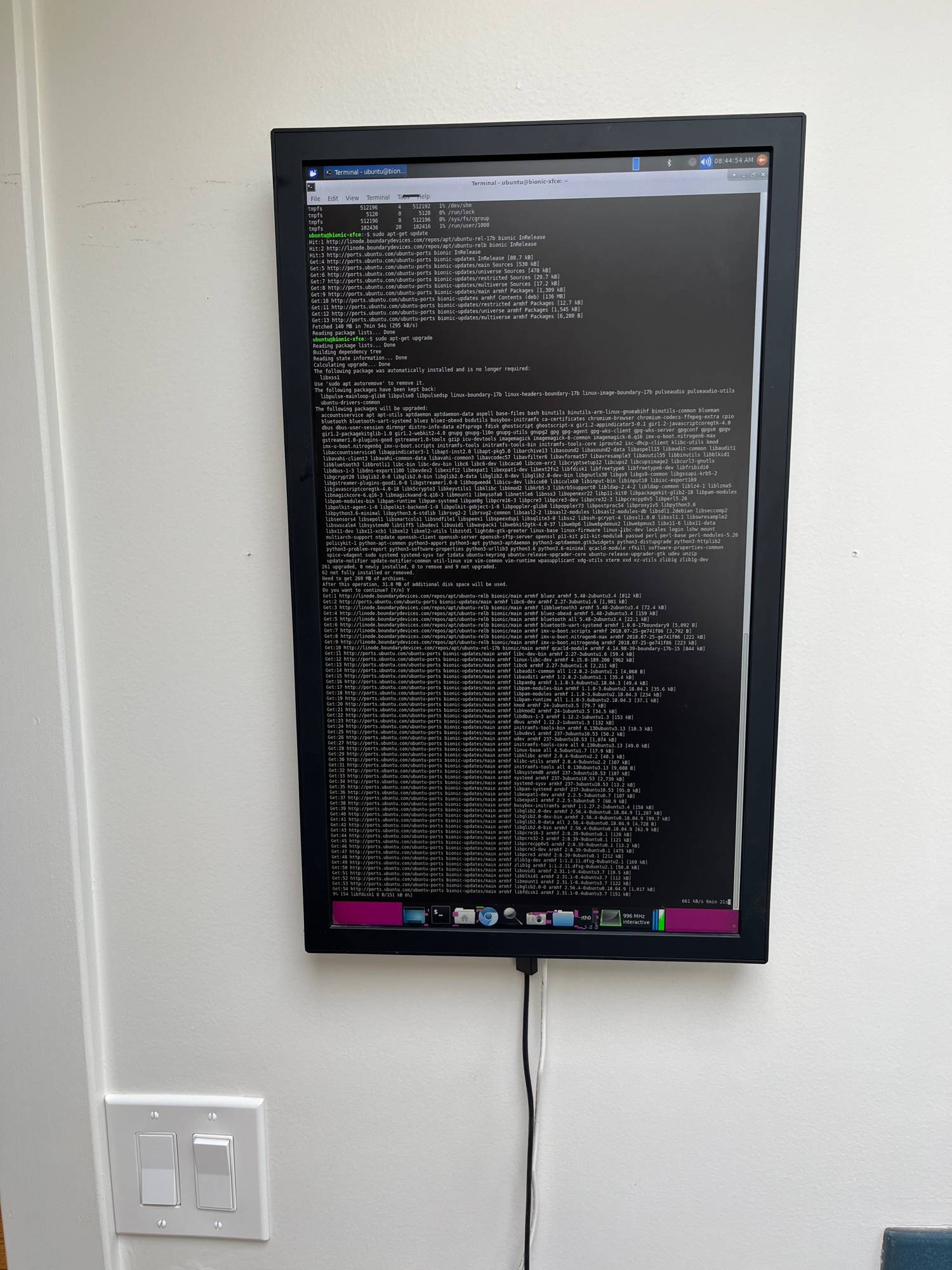 So, now what? What are you going to do with your wall computer, Charlie?

Like... remember that post from Brian Donahue about displaying the NY Times frontpage on his EO1 (which itself was derived from another post about building a giganto e-ink display to do the same)? How about that?

Much of Brian's repo is about communicating with the Electric Objects API. But we're not going to do that, are we? The real nugget of gold here is the deterministic URL for grabbing a PDF of the NY Time front page:

I bet we could make a nice one-liner to download today's front page using today's date and then open it up full screen somehow and then make it run this script every time the computer boots up.

That turned out to be more complicated than expected (typical). I hacked and slashed (and Googled) my way to the following setup, which works (I know it's not a one-liner, but doing it this way really helped me debug why each step - yes, each step - wasn't working at some point in this process):

Then, you can use crontab to setup this script to run every time the computer boots with the @reboot keyword (which I didn't know about before and works as valid cron syntax - depending on your cron version). Don't forget to chmod +x your script first!

Well, does it work? 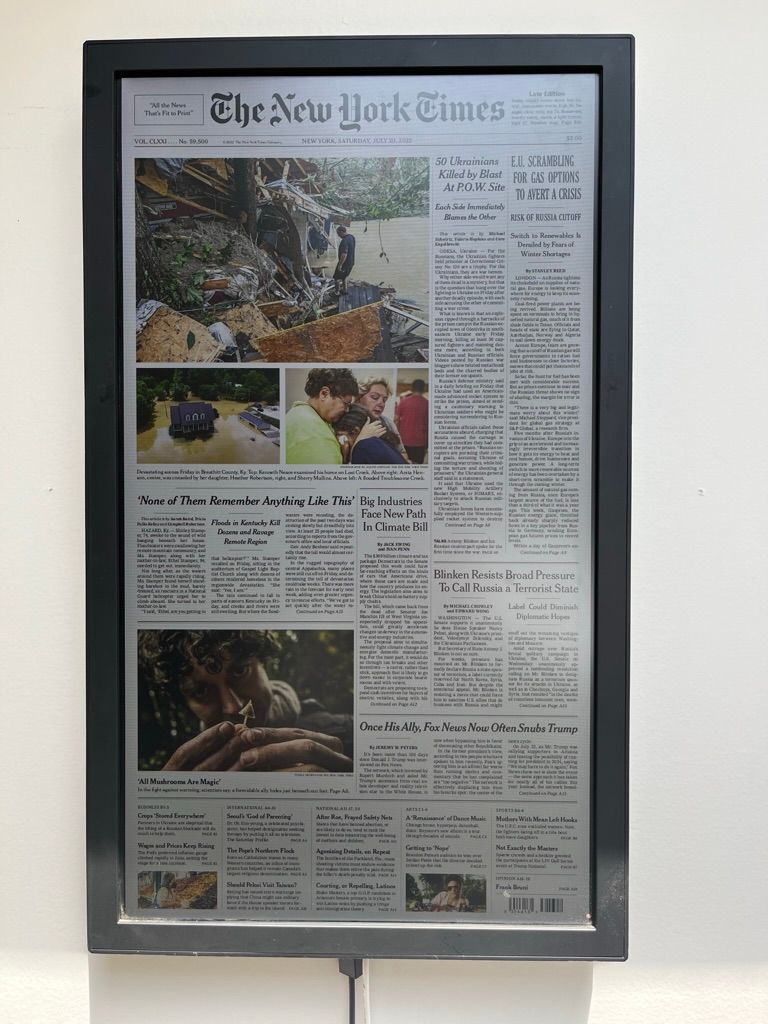 For the curious, migrating my one-liner/script to cron had a bunch of challenges (e.g. cron doesn't like % without escaping them; I needed to add sleep to ensure networking/wifi had loaded; I needed to add the DISPLAY env var so that cron knew how to talk to the display, etc). Also, I needed to install postfix so that I could read cron's error logs, which amazingly are emailed to your computer.

After all that, I connected the EO1 power cable to a Wemo smart outlet plug thingie, which integrated with Apple Homekit. Using the Apple Home app, I set this outlet to turn on at 6 AM and then turn off 2 hours later.

After a few evenings, I thought this "5 minute" project was done until I noticed that the screen was going dark at the 1 hour mark.

This particular Ubuntu distro's Power settings did not provide me the option of "never going to sleep". More Googling led me down many failed paths (e.g. masking stuff in systemctl, trying gnome-tweaks) until I finally got something that keeps the EO1 display "awake" - the caffeine utility.

I added this line to the end of my script, and now we're awake and jittery... at 6 AM. But at least we have today's paper to read.

Are we done puttering yet?

Now I'm adding Tailscale so that I can officially disconnect the keyboard and mouse and still be able to easy SSH into this wall computer. And I think I broke something else running sudo apt-get update, cause it's not booting up right now. Sigh...

Also, this whole caffeine thing makes me realize that I don't want to read anything before coffee, so I think automating morning coffee has got to be the next step.

I hope this little project reinvigorates your faith in the EO1, noble carriers of this wonderous device. Here's to even more people starting computer companies!