I just finished reading The Order of Time by Carlo Rovelli last night. It's a lovely little book about quantum gravity and the nature of time that I barely understood. But one thing I took away was that time -- and, by extension, the true meaning in our lives -- is driven by our memory, our nostalgia.

"...which is why I think it makes sense to keep this vintage 1989 Apple Macintosh SE/30 on our bedside table."

No dice. I also tried appealing to hobbies, and their role in maintaining a balanced life.

But, alas, my new precious is headed for The Troll Pit where (more than) a few Apple II's will keep it company.

How does one go from having zero vintage computers to... many of them? Gradually, and then suddenly.

But, for at least a few more days, I'll be rocking this utterly tricked-out compact Macintosh on our dining room table. It is #MARCHintosh, after all. 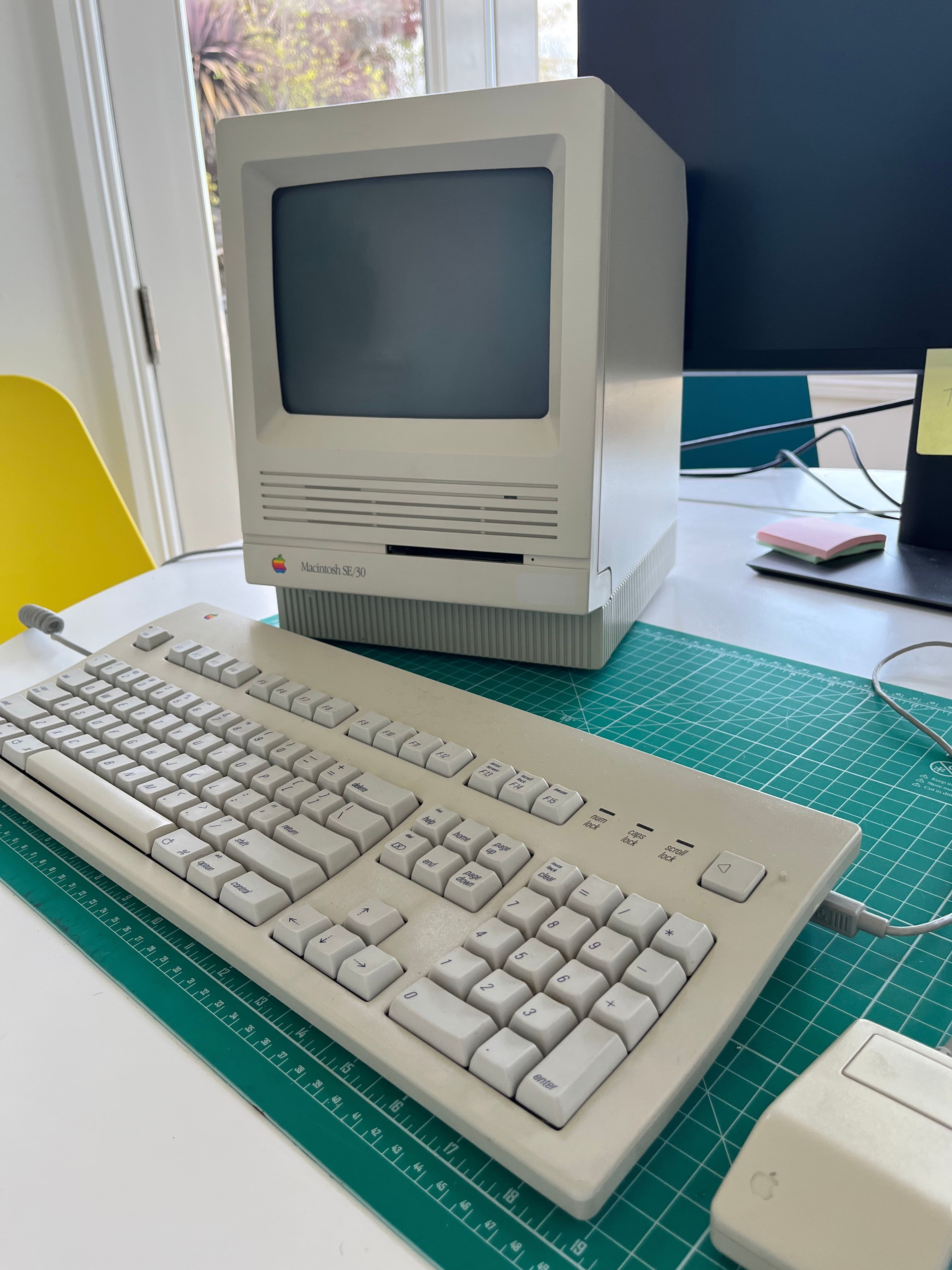 That's right. I've acquired the computer of my dreams: an Apple Macintosh SE/30, considered by many Apple wizards to be the greatest Mac of all time (or, at least, the 6th most "notable" Mac ever).

Buying something from someone

We're still allowed to do this on the Internet. Two live human beings can arrange an exchange of an owned, physical item for some form of (let's be honest, digital) payment. You don't need to buy everything from Amazon.

eBay's still a thing. Craiglist is still its weird self. And FB Marketplace is probably the best one of them all right now, for a very specific reason: it's insanely easy to go from a listing to a little Messenger chat with the seller. No more weird anonymized emails via Craigslist that feel like you're sending a fax to your grandfather in 1978. Yes, you do have to have the FB app AND its companion Messenger app, but there's gold in them thar vintage computer listings, I tell you. Actually, I shouldn't be saying this, because I don't want lose this precious alpha.

After many evenings of eBay alerts and FB Marketplace searches, I found a Mac SE/30 for sale in the greater Boston area, where I don't live, but I frequently visit. The rest is just boring details, which I fully document in the riveting Episode III of IN THE TROLL PIT (my live-stream / YouTube channel about vintage computers):

Long story short, I got the dang thing, and it works! But I was also scared, because what if it stopped working?

In fact, I did a lil' research, and found out that these compact Macs got problems. There's a thing inside called a PRAM battery that looks like a mini D-cell and it helps keep things like the correct date going, and it's basically doomed to explode. Sages tell us that it's an absolute must to remove this battery in the modern era, or you're gonna have a bad time.

Next big ticking time-bomb are the electrolytic capacitors, which are just gonna do pretty much the same thing as the battery: get all weird and puffy and oozy and start leaking everywhere on the circuit board. One of the tell-tale signs of leaking electrolytic fluid in compact Macs is when the sound stops working.

Guess what? This thing's got no sound.

After that, I was afraid to turn on my precious. If you recall my adventures with the Apple IIe I found in the trash, I'm no stranger to capacitor issues.

Knowing when to ask for help

Thanks to my prolific 8-Bit Guy viewing habits, I knew that my Mac needed "professional" help.

Why didn't I try to fix this myself? This computer -- unlike the Apple II -- has some serious high voltage components inside: the CRT. Basically, the cuteness-factor of its built-in screen is what makes this computer so tricky -- and dangerous -- to repair. There are all sorts of guides on YouTube explaining how to safely discharge the CRT with some screwdriver-looking-grounded gadget, but that's something I don't want to fumble through.

During my extensive vision quest for this machine, I had many conversations with folks on eBay and FB Marketplace about their various wares, so I decided to reach out to one of them who seemed pretty nice on our first go-round. Maybe they could help me out or knew someone who could help.

I hit the jackpot with my first reach out.

Soon, I delivered him my machine. Almost immediately, I started receiving regular text updates about my Mac: before-and-after cleaning photos, absurd RAM upgrade options, etc. He also sent along pictures throughout the restoration, which were like little treats for me. I knew my Mac was in capable, caring hands. When I finally picked it up two weeks later, my little cutie had changed, a lot.

Why this computer is super cool

In addition to giving it a nice once-over (no retrobrite, just some wiping), removing the PRAM battery, swapping out the capacitors, my "dealer" also offered to upgrade my machine's RAM (which started out as a measly 1MB). Going to 4 MB seemed like a good idea (and the max stock RAM was 8 MB), but he also offered going further... to the absolute max possible in this machine: a whopping 128MB, which would also require an upgraded ROM chip.

He went for it. Here are some action shots.

First, opening up the hood. 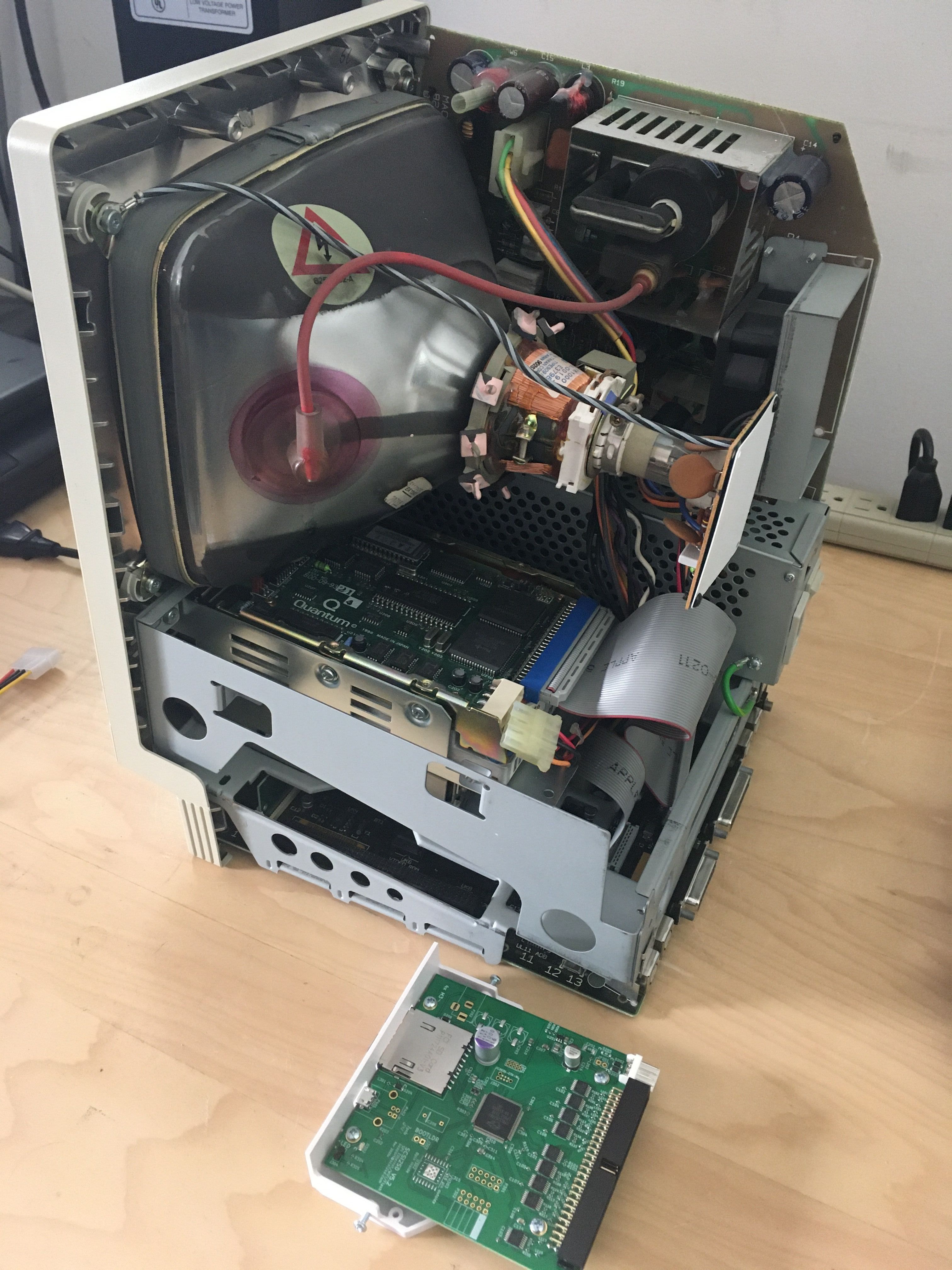 Now we can see the original state of the board. Note the little red battery in the upper left. That's our PRAM battery. Goodbye, accurate dates. Also, the upper right is where the RAM goes. Notice that we're not using all of the available slots, which seems less than ideal. 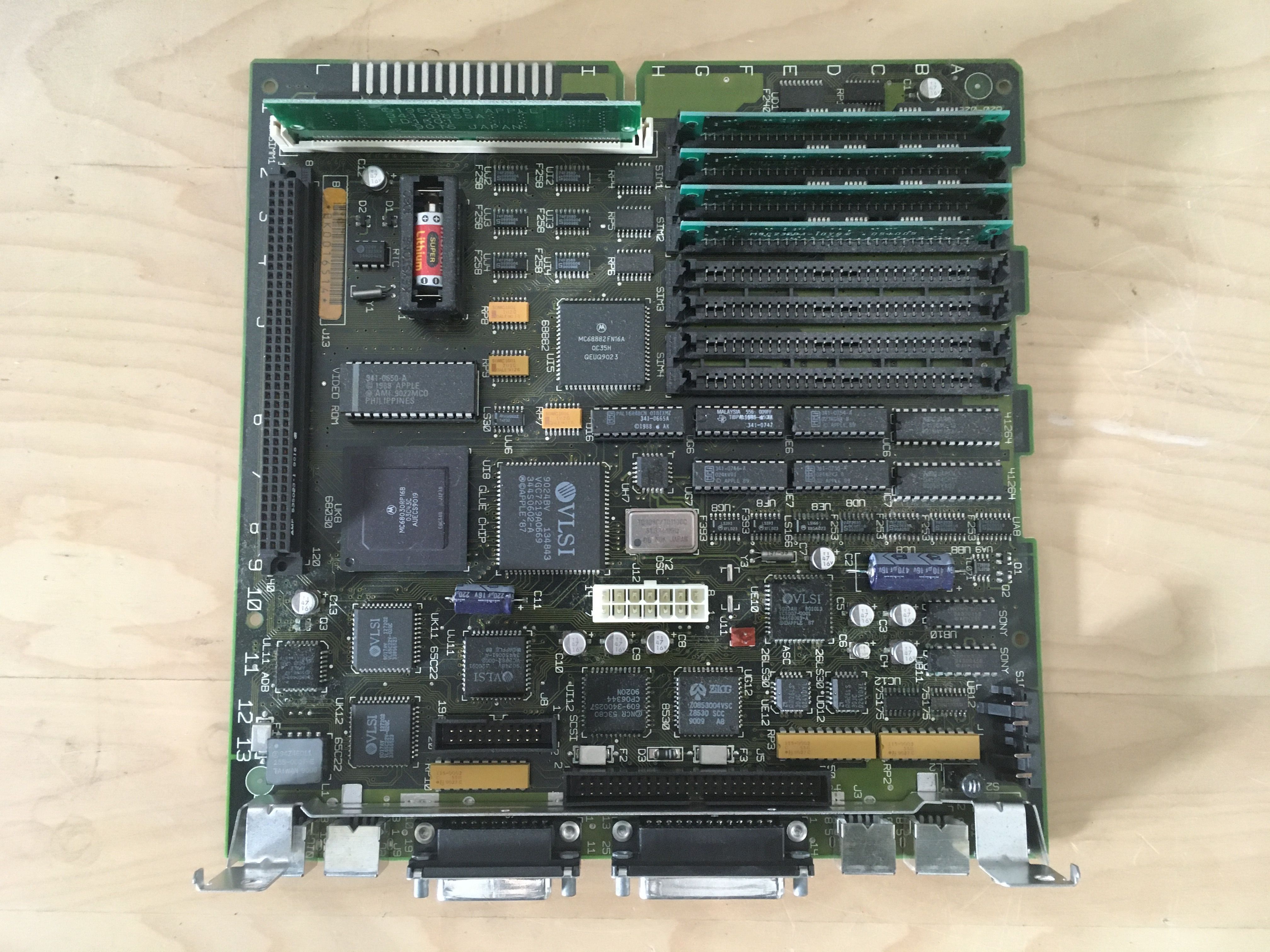 In addition to the RAM chips, we installed the Mac ROM-inator-II from Big Mess O'Wires. 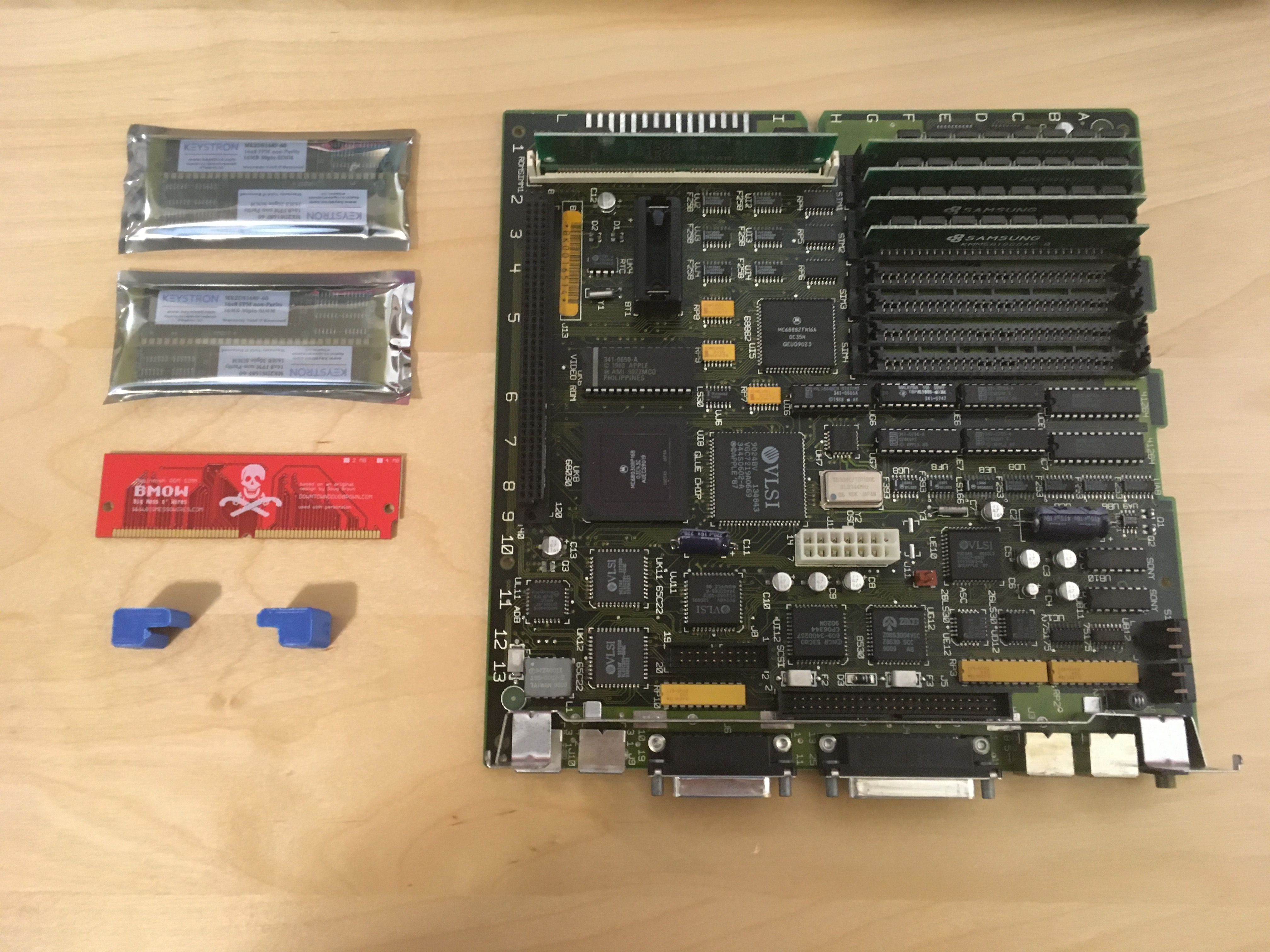 For $39 bucks, this ROM chip gives my Mac (according to their website): 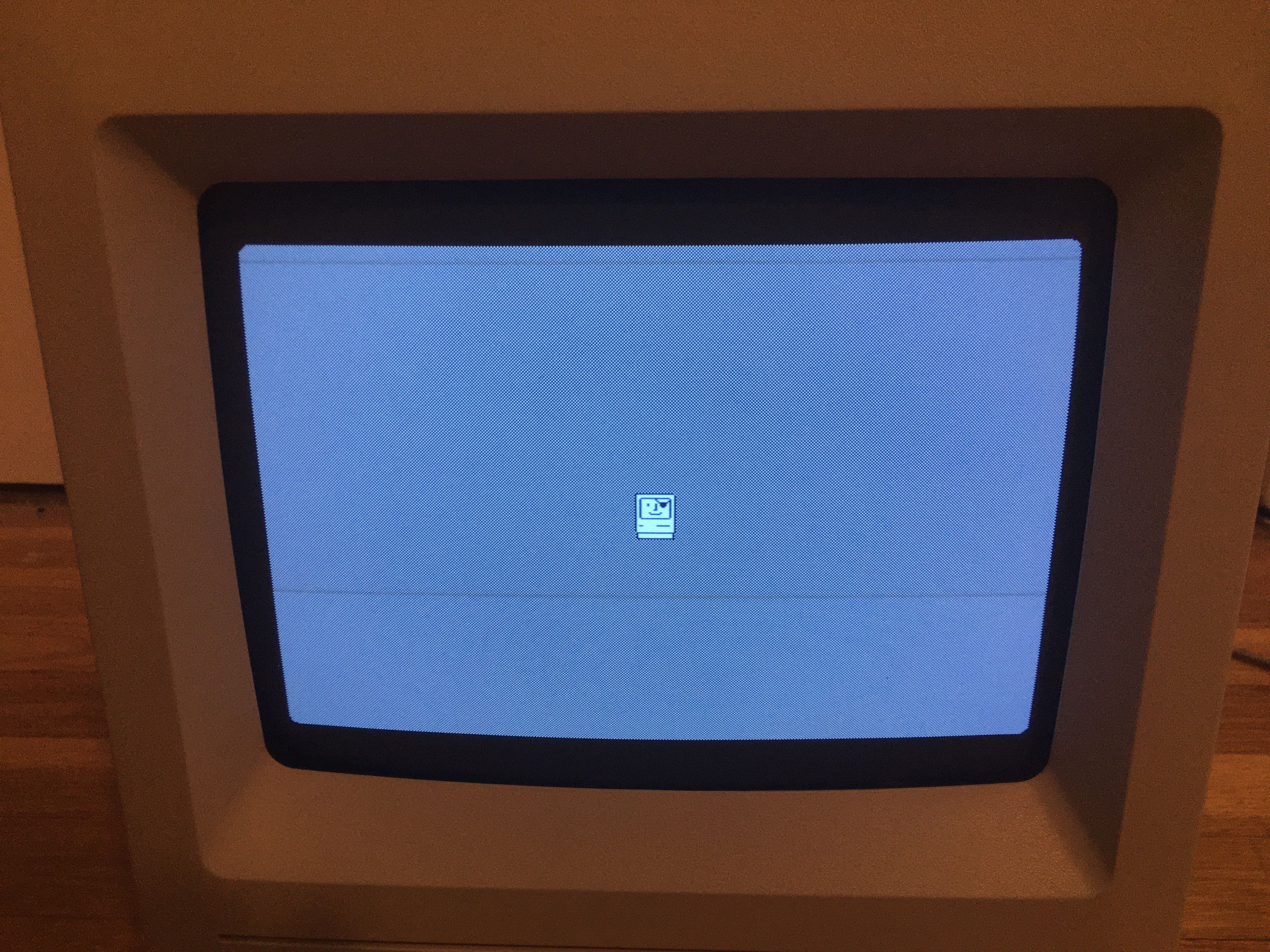 Here's our baby with its upgraded ROM and RAM: 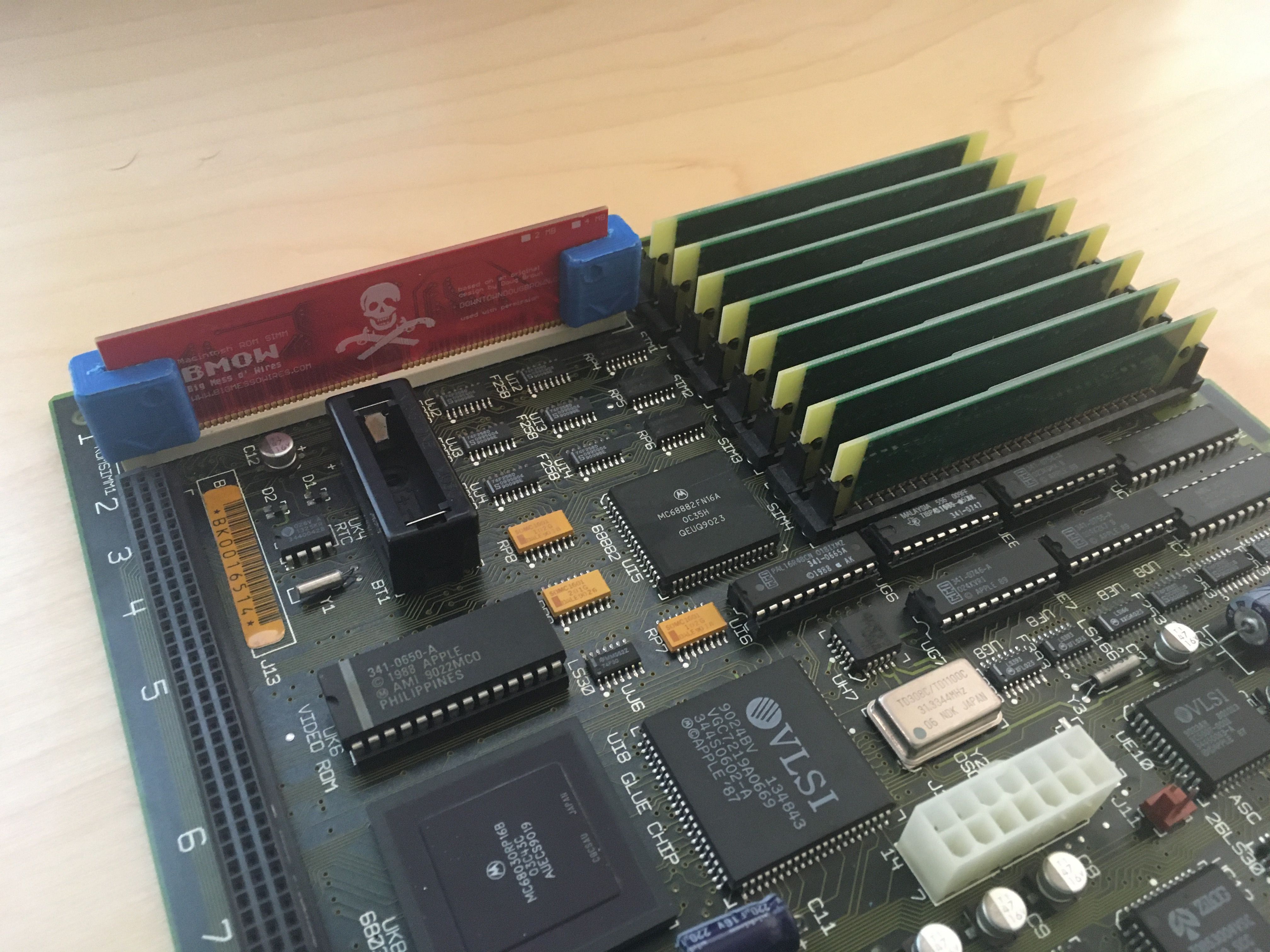 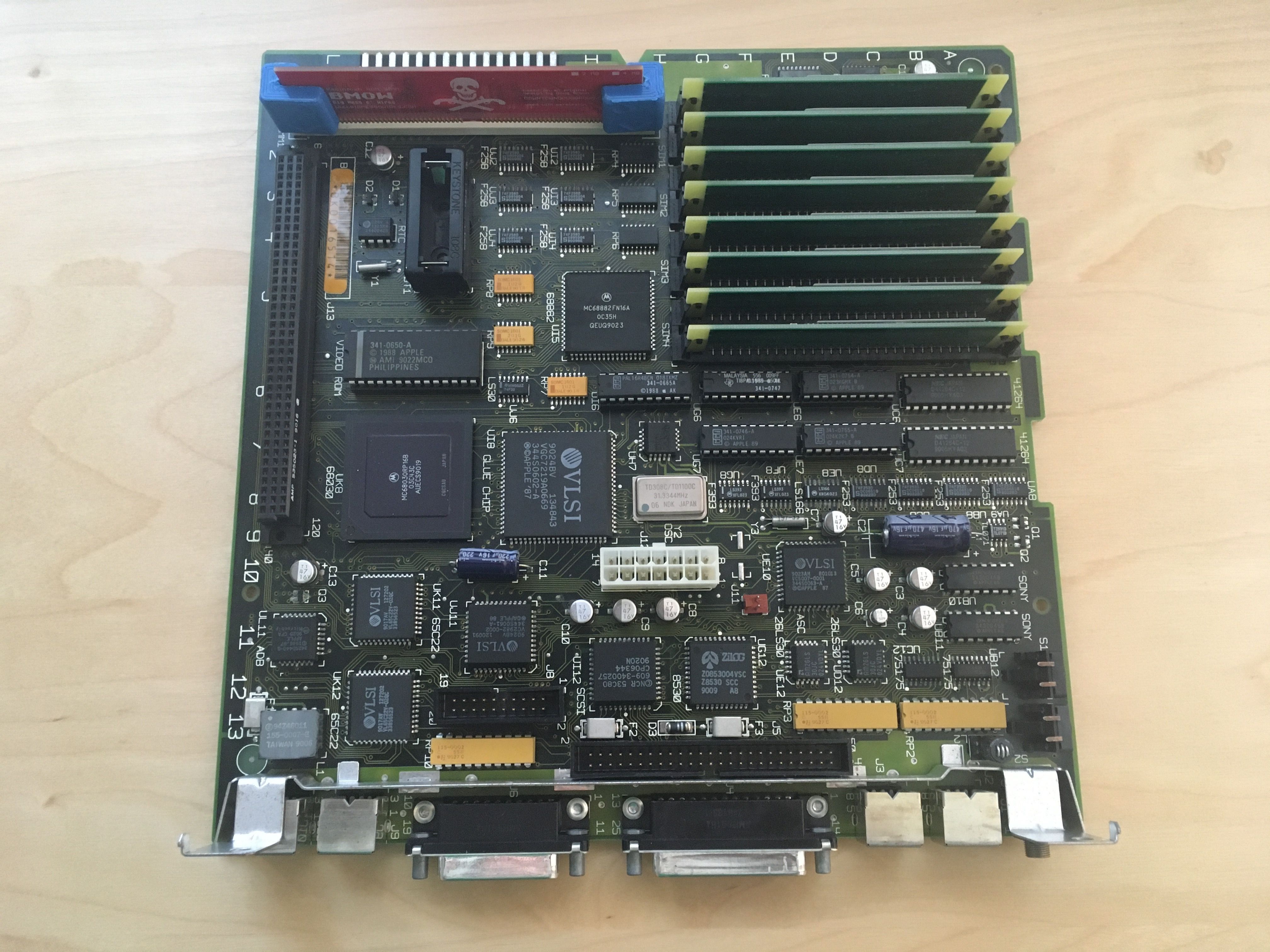 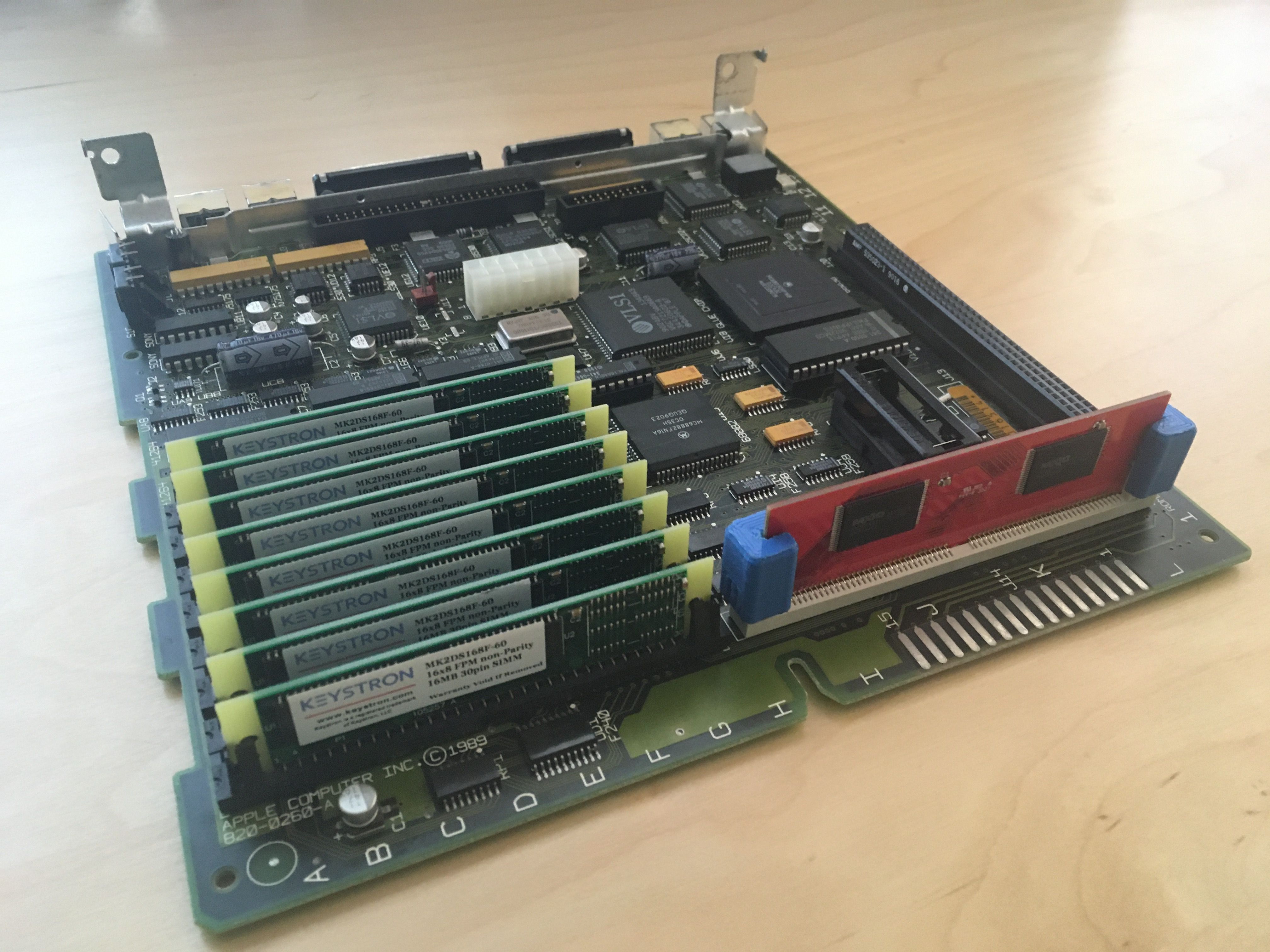 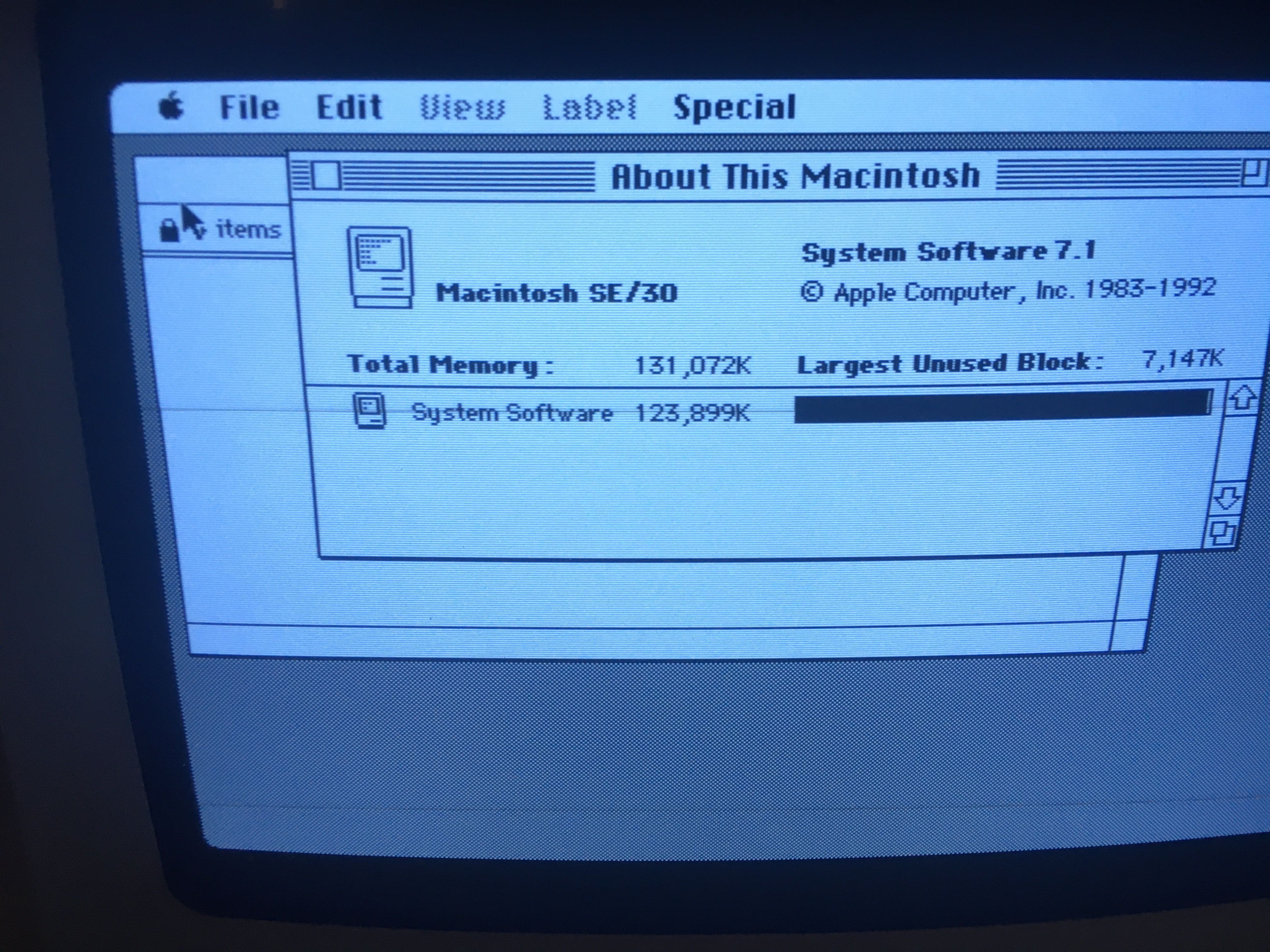 ActionRetro has a great YouTube video describing the same RAM/ROM setup. Honestly, I have no idea how to even leverage this RAM, but I had to have it.

Also, my "computer guy" replaced the existing hard disk with a SCSI2SD, installing System 7 and even Mac OS 8.1 along with the original System 6 on the SD card. There are also other options for this like BlueSCSI or the FloppyEmu. My guy was familiar with SCSI2SD, so we went with this approach. I'm happy. The only thing I'm slightly concerned about is what happens if the SD card just randomly dies (like has happened on several of my Raspberry Pi's), cause I'd have to open up the case to fix it, I think. I'm thinking that I might grab a FloppyEmu as a back-up.

Switching between the OS versions is super easy. There's a shortcut to called System Picker - and I just pick a system and then restart and boom, I'm in the selected OS. Mac OS 8.1 takes a bit longer to load than the others, but that's probably cause it was never supposed to work on this machine in the first place, which is cool.

Finally, my guy left me a little Welcome note (written in SimpleText) on the desktop with some tips, like how to set the correct date in the Control Panel now that the battery's gone, as well as how to enable 32-bit addressing to make use of the 128 MB RAM (as 24-bit addressing has a 16 MB limit).

This was all-around fantastic customer service, facilitated via shared nerdy interests on the Internet.

Games and apps and stuff

Finally! What we've all been waiting for! Here are some early highlights and delights among the apps on my SE/30.

A true classic, written by Bill Atkinson himself. Without MacPaint, I would posit there would be no Mario Paint, so I'm forever grateful. 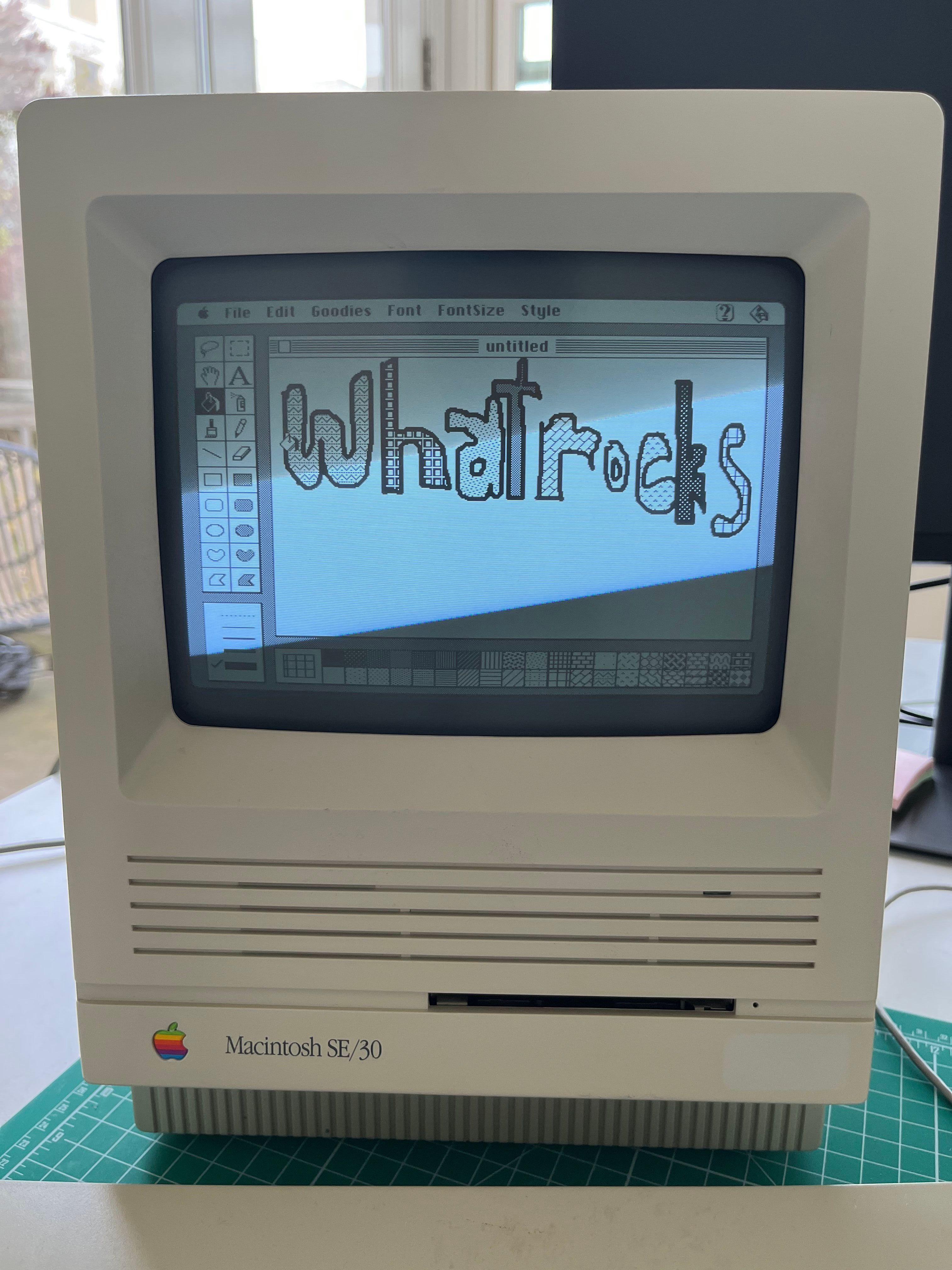 Another Atkinson wonder. I'm pretty sure that the original version of Myst was just a HyperCard stack. As an amateur Tools-For-Thought-o-phile, I'm excited to poke around here and make something as weird as my brain.

To that end, I bought the HyperCard manual on eBay. 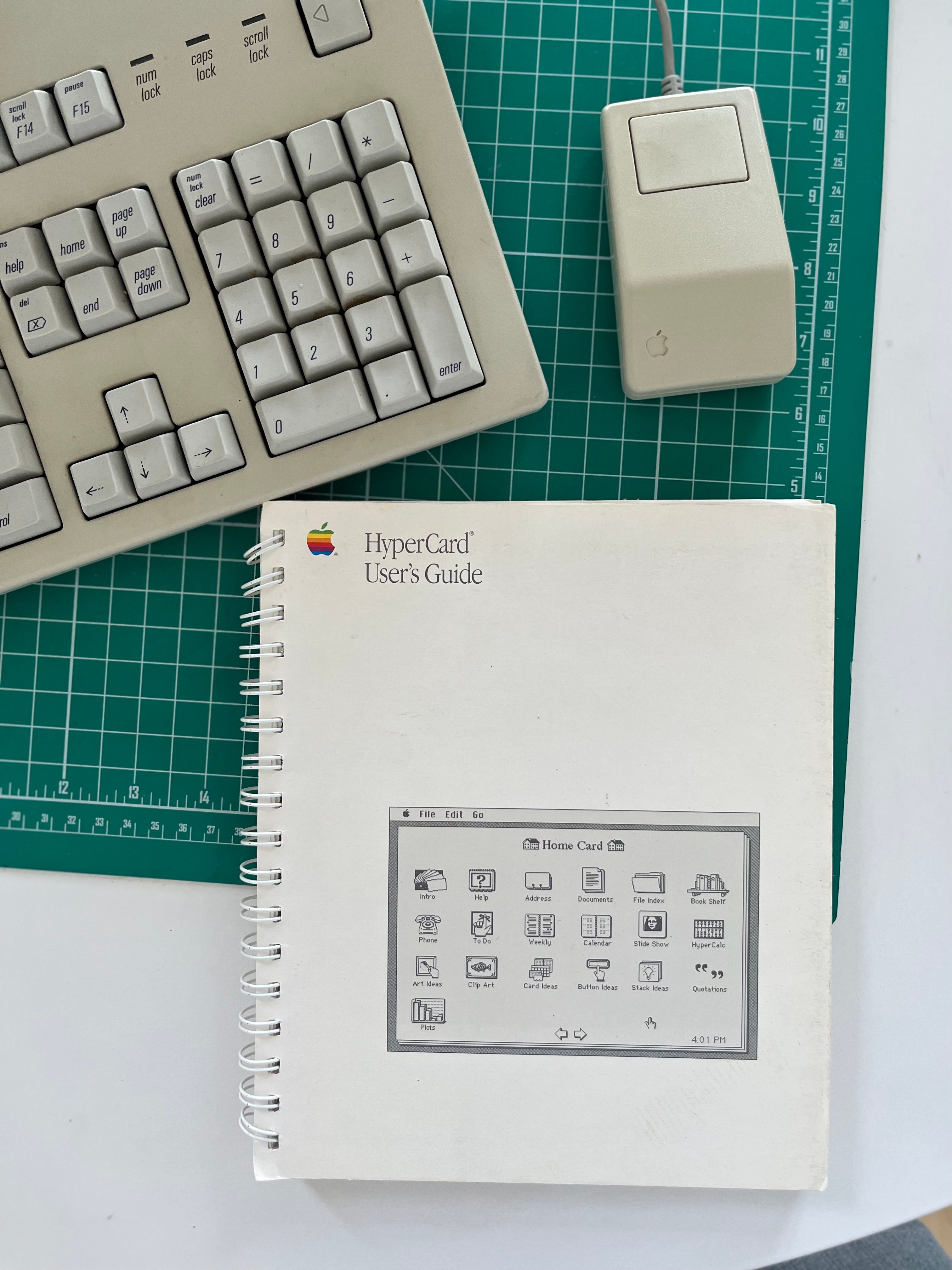 There are songs and you can play them on your computer. And even write your own. This feels like the origins of GarageBand or Logic, but for people who understand music notation (not me -- yet!)

What Mac would be complete without a copy of BBEdit? I'm excited to figure out how to code up some stuff on this Mac soon. I don't even know what language that would be in... Objective C? Smalltalk? I need to do some more research.

The music, just as good as I remember. The graphics, not so much. 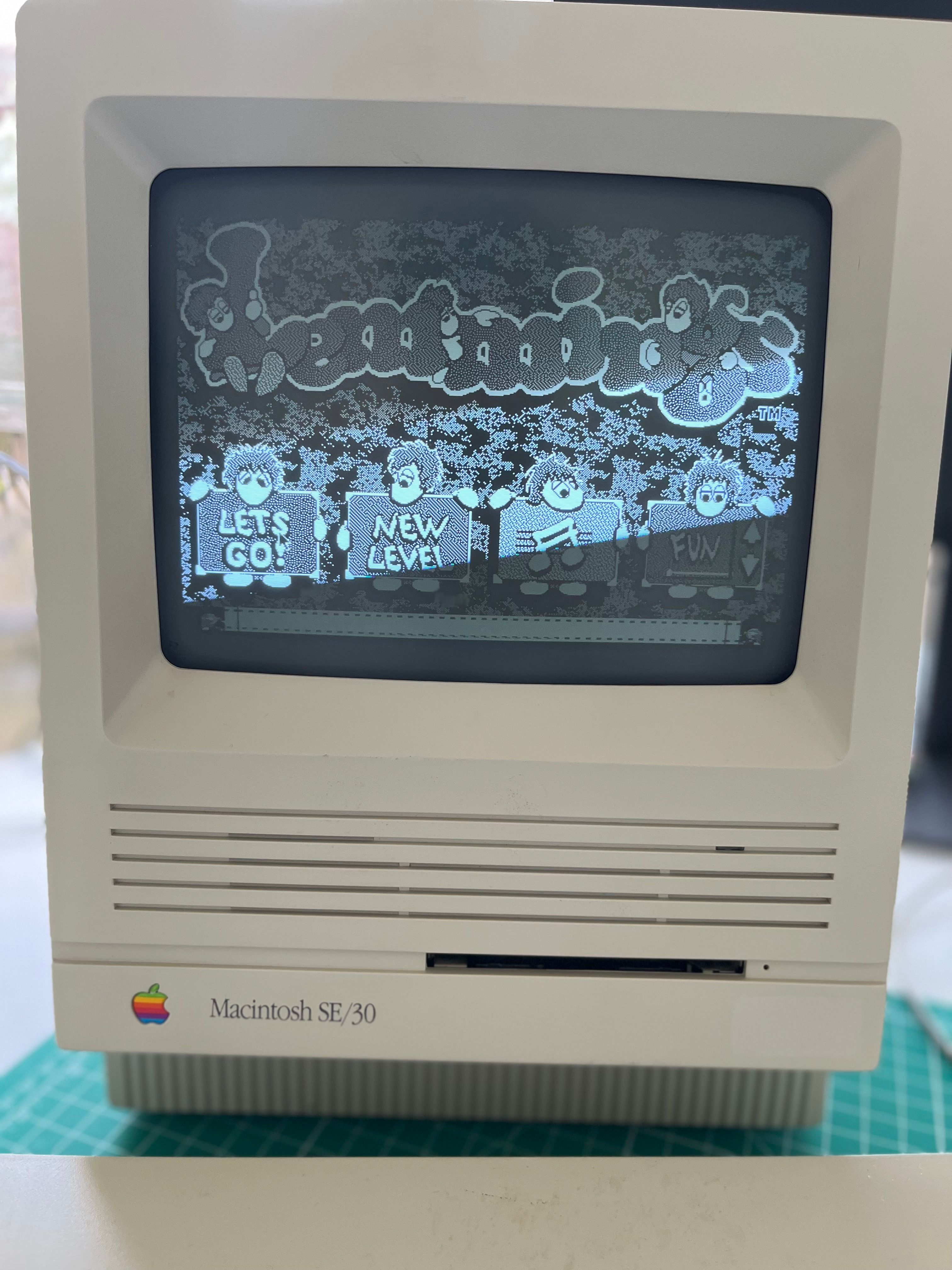 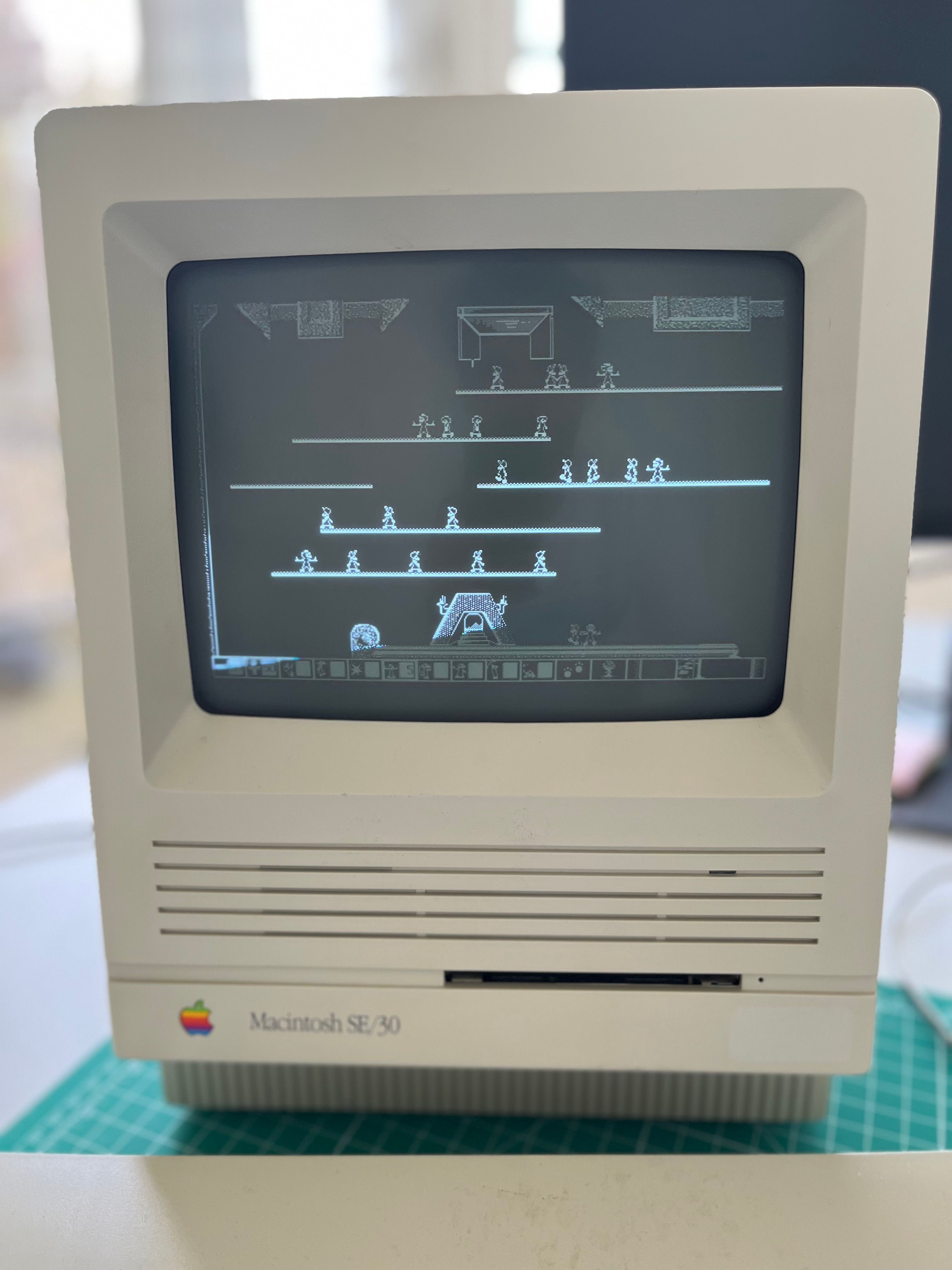 The game that birthed an utterly time-consuming franchise for many of my close friends. I'm worried about diving in too deep here. 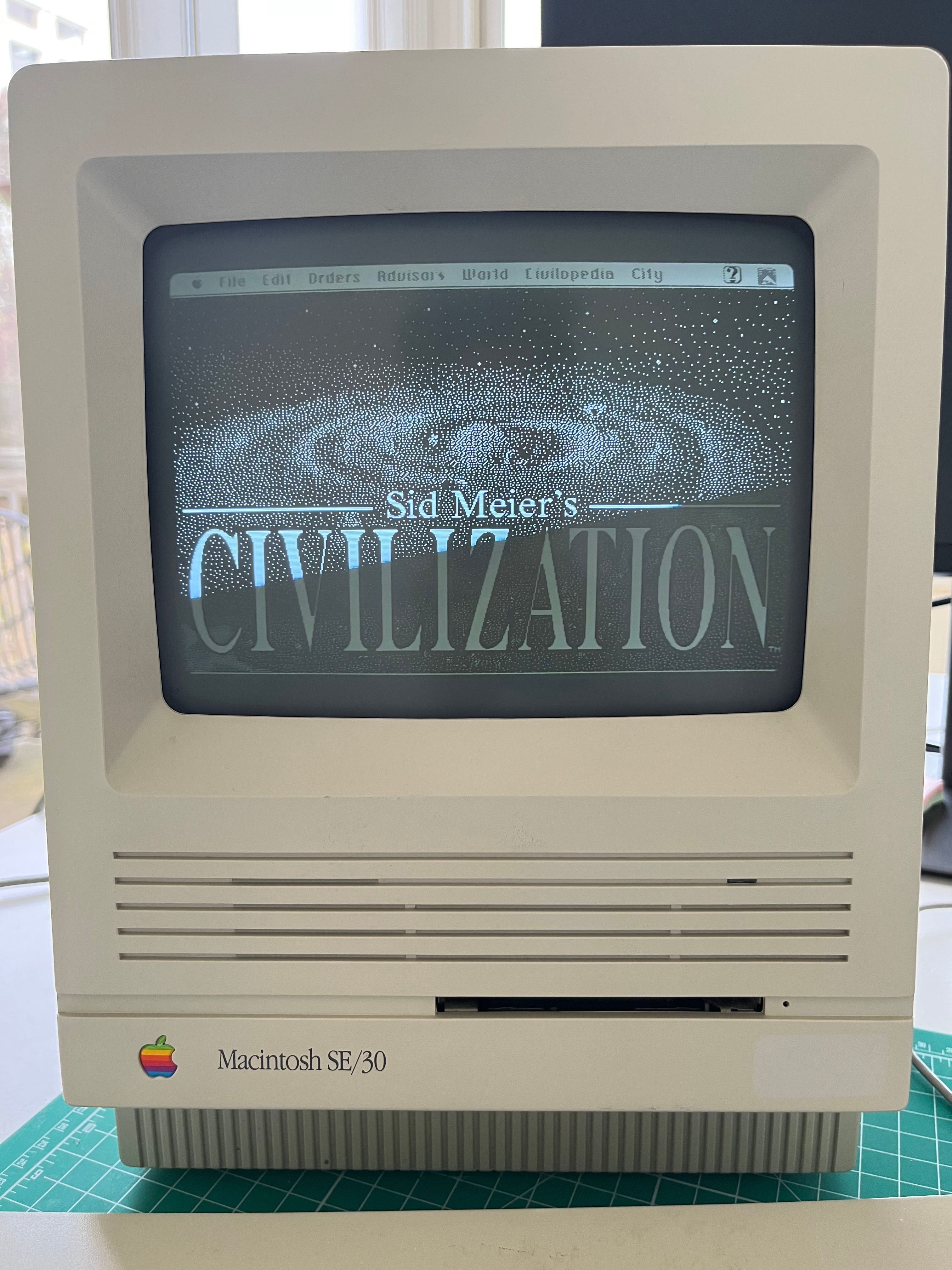 Yes, Mom, this has Oregon Trail. 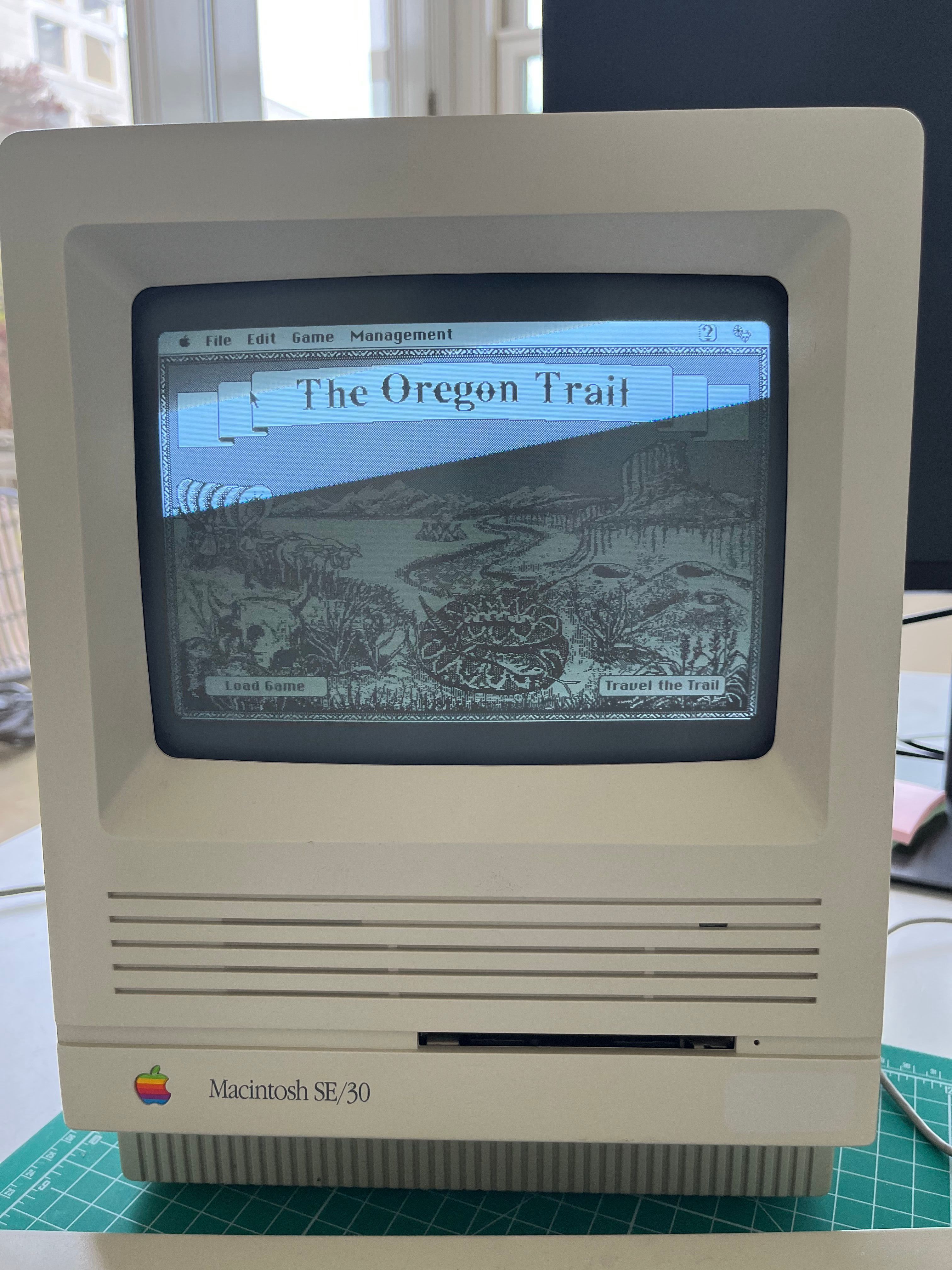 Everyone's favorite screen saver application! And I get it. I've already spent over an hour reminding myself of all the different options. I probably should have mentioned this before, but this isn't my first rodeo with compact Macs. My Uncle Sean had one, and my cousins and I spent hours playing games on it in their attic bedroom. 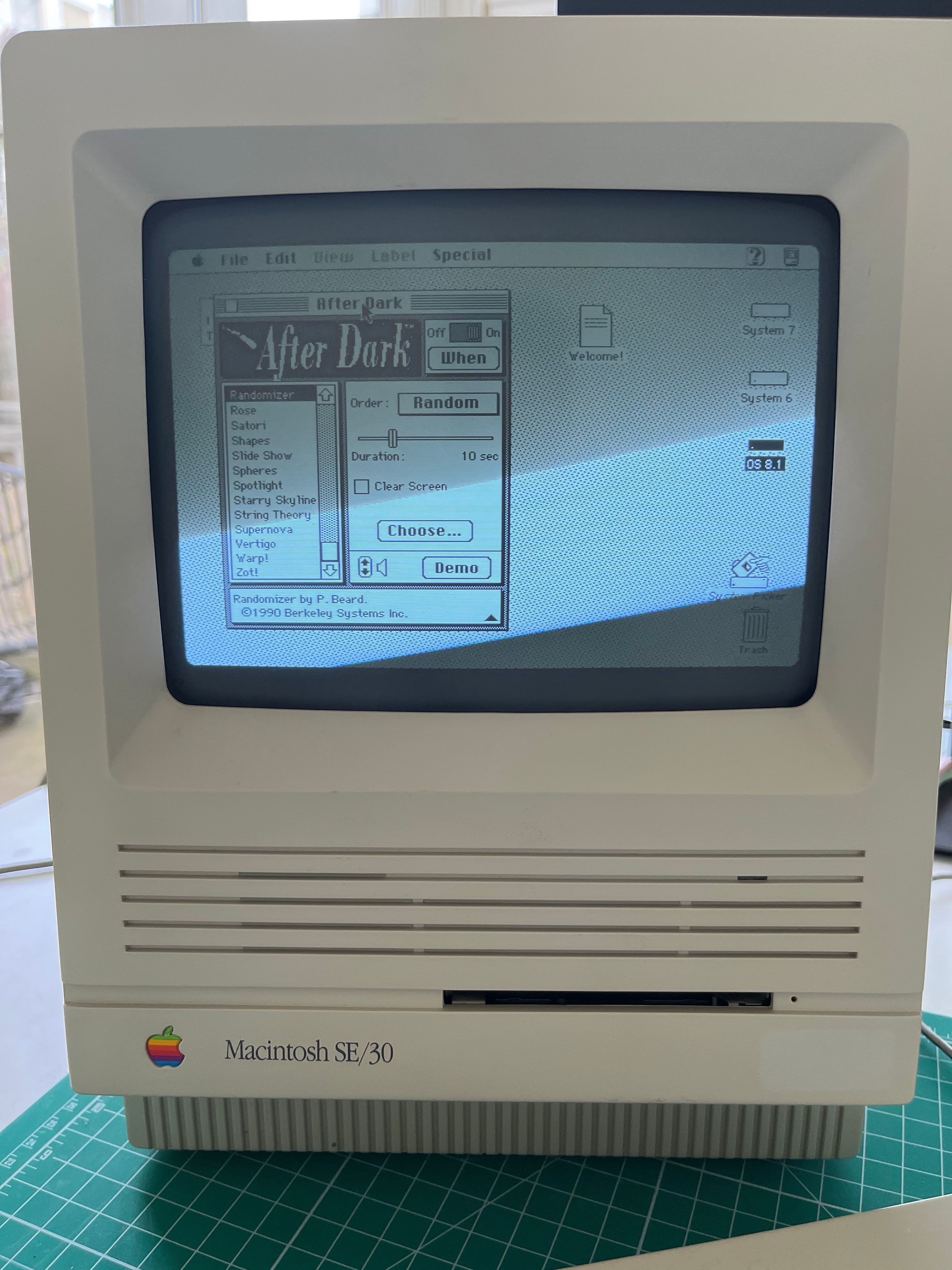 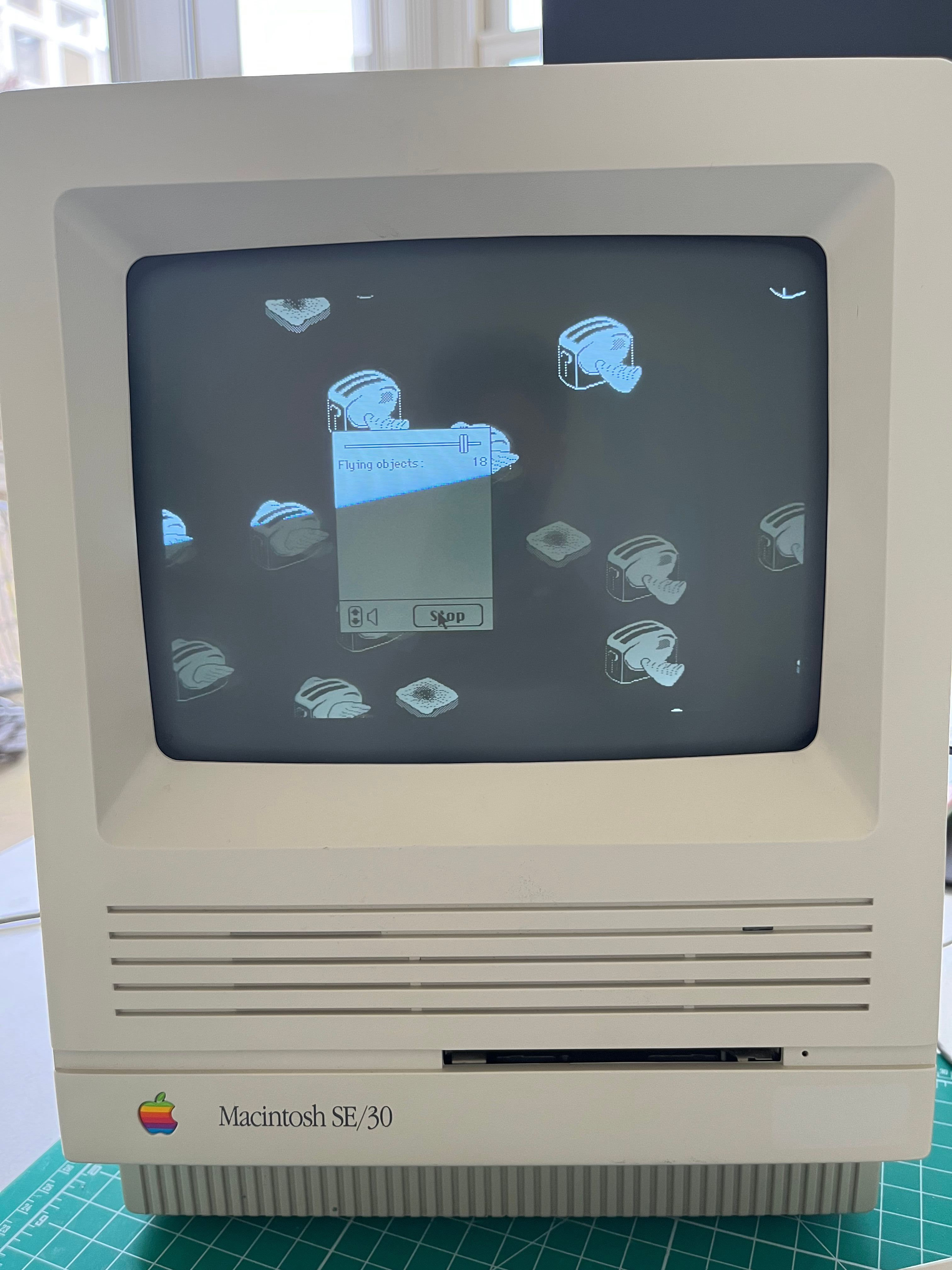 Send me your ideas or old floppies, please.

P.S. Some meditations on a beige box

This is my personal computer. My data lives here. Not on the internet. When I turn this on and play Tetris, I can see my friend Steve's high score from last week on the leader board, when he visited me and I forced him to play this thing.

The Mac SE/30 feels "personal" in a way that my swappable, cloud-backed-up phone and modern laptop just don't. They're dumb terminals, but this is MY smart computer.

I now get the love for the Apple Extended Keyboard II. Also, plugging the one-button mouse into it is also weird and cute. 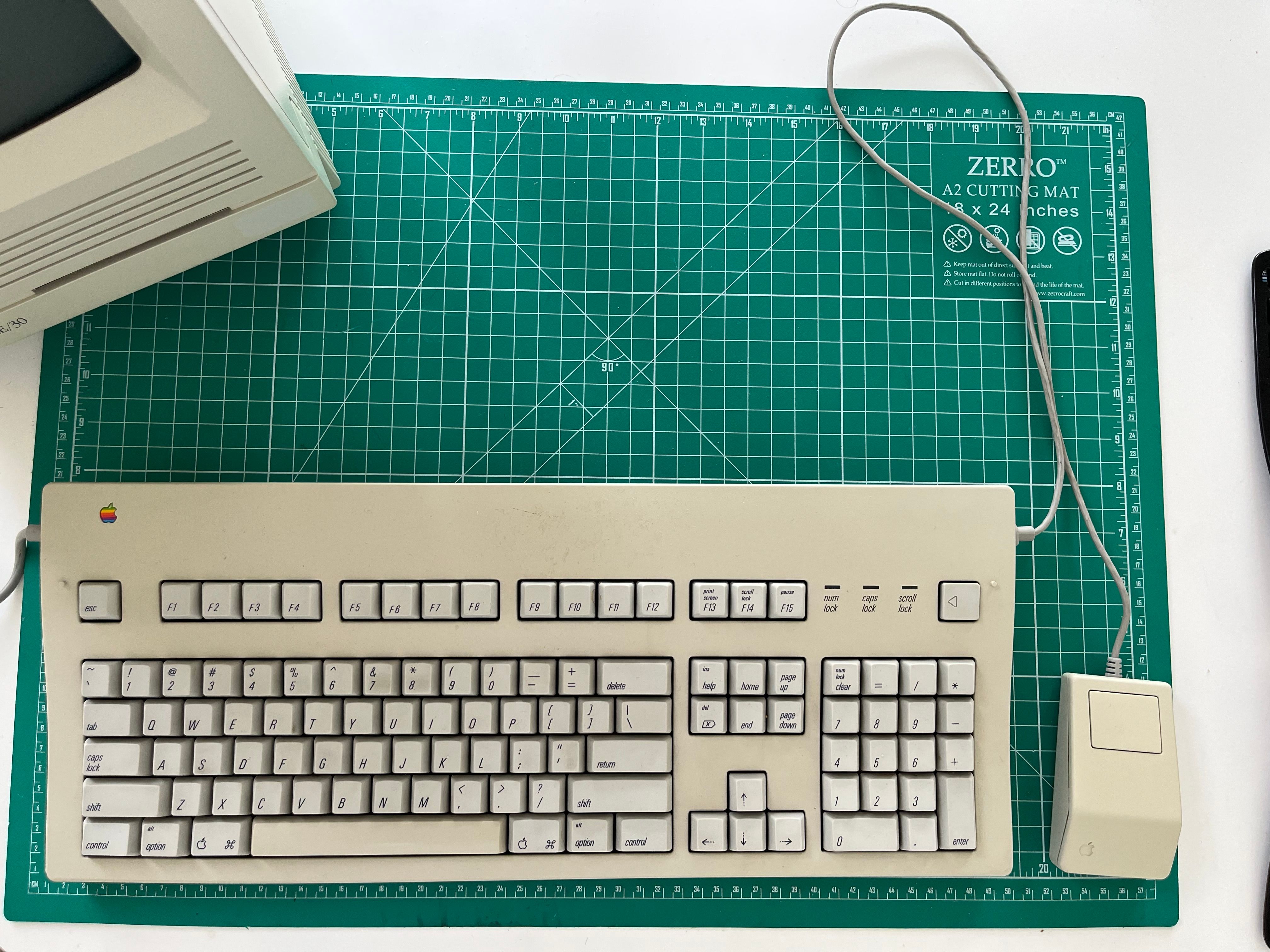